Nearly 73 percent of travelers participating in a pilot vaccine program in Guam are aged 49 or younger, with most choosing to be inoculated with Moderna’s or Pfizer-BioNTech’s COVID-19 vaccine, Lion Travel said yesterday.

The US territory launched the Air Vaccination and Vacation program to boost its tourism sector.

While travel agencies in Taiwan are barred from organizing overseas tours during the COVID-19 pandemic, they are allowed to arrange flights and accommodation. 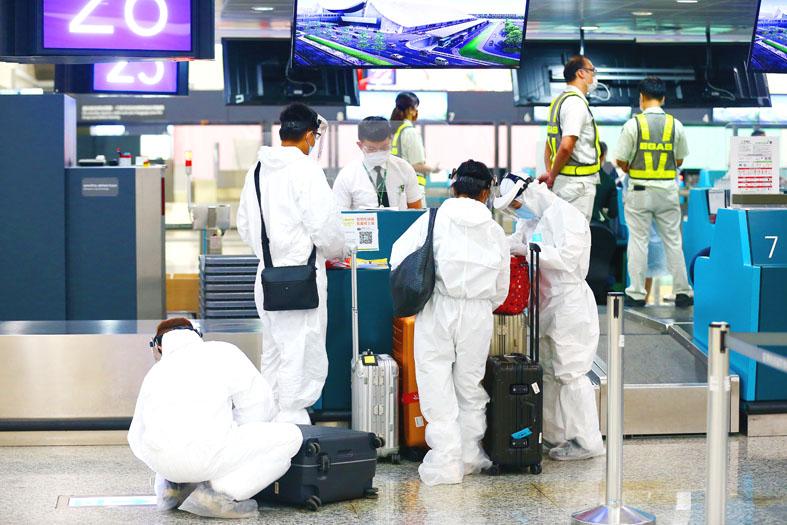 While the Central Epidemic Command Center (CECC) has not banned people from traveling overseas to get vaccinated, since Friday last week it has required all people arriving from overseas to undergo polymerase chain reaction tests and quarantine for 14 days upon arrival to prevent the spread of the Delta variant of SARS-CoV-2.

Lion Travel’s first vaccine tour group departed for Guam at 9am yesterday, as did groups with other travel agencies.

It was the airline’s first passenger flight to the US territory since 2017.

Lion Travel general manager Andy Yu (游國珍) said that the biggest age groups among those on the first flight were 20 to 29 and 40 to 49, with each accounting for 21.1 percent of the travelers.

“We think they took the flight because they are not in CECC vaccination priority groups and they want to get the jab as soon as possible, given the COVID-19 outbreak in Taiwan,” he said. “Some of them need to get vaccinated, as they frequently travel overseas for business.”

Messenger RNA vaccines reportedly offer stronger protection against variants of COVID-19, the travel agency said when asked why most travelers preferred to get inoculated with a regime requiring two shots.

The preference for Moderna and Pfizer-BioNTech boosted sales for a 22-day package, with 80 percent of the spots in the first of such packages being filled, it said.

All 439 spots in its five-day Guam packages have been booked, it said.

As of yesterday, 300 people had signed up for seven-day packages, Lion Travel said.

Comments will be moderated. Keep comments relevant to the article. Remarks containing abusive and obscene language, personal attacks of any kind or promotion will be removed and the user banned. Final decision will be at the discretion of the Taipei Times.