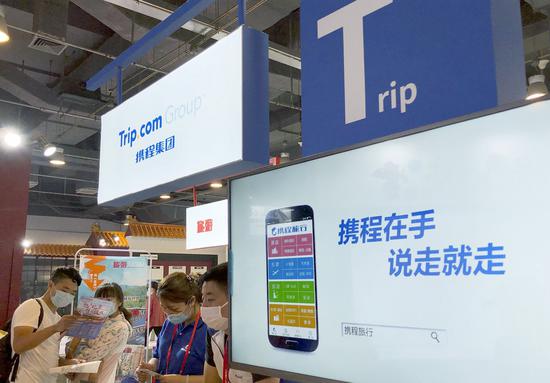 Visitors check information brochures at the Trip.com Group stand during an expo in Beijing. (Photo/China Daily)

Compared with the first quarter of 2019 before the outbreak of the COVID-19 pandemic, both domestic hotel and air ticketing reservations have fully recovered since early March and achieved double-digit growth, according to the company’s latest earnings report released on Wednesday.

In the first quarter, Trip.com achieved sales revenue of 4.1 billion yuan ($628 million). During the period, its net profit reached 1.8 billion yuan, surging nearly 80 percent over the previous quarter, and the company has remained profitable for three consecutive quarters.

Earlier this year, a few waves of COVID-19 infections reemerged in some regions across China, and precautionary measures－including varying levels of travel restrictions and encouragement of reduced travel during the Chinese Lunar New Year－have reduced travel demand. But China’s domestic travel rebounded quickly in March and showed even stronger momentum in April and May, said Trip.com Group.

Trip.com made its secondary listing in Hong Kong on April 19, years after it debuted on the Nasdaq stock market in 2003. So far, the Hong Kong-listed stock has maintained its share price of HK$304.8 ($39.3) above the offering price since its IPO. Multiple institutions have raised the ratings of Trip.com before its quarterly earnings release.

The rapid demand increase from consumers who come from smaller cities helped fuel the growth of Tongcheng-Elong. In the first three months, about 60 percent of new consumers who made payments for travel products through WeChat came from third-tier and smaller cities, its data found.

“With the pandemic increasingly brought under better control in China and the country’s efforts to drive domestic demand, China’s tourism industry will fully explore its domestic resources to stimulate consumption and propel economic growth,” said Luo Xiang, an analyst of the LeadLeo Research Institute, a market research provider.

“This year marks the centenary of the founding of the Communist Party of China. Tourism operators will further promote red tourism and launch more tours to explore the history of the CPC,” he said.

What Is Computer Science