Italy: the very word conjures up animated piazzas and happy, gesticulating, gelato-eating crowds of tourists and locals, buzzing amid the extraordinary beauty.

But now imagine Italy’s cities in summer without Americans, and you have empty towns, cafes and museums. And many near-destitute tour guides.

“The lack of North American clients in Italy is felt across the country, from coffee bars to luxury villa rentals,” says Megan Todd, program director at Context Travel in Rome.

The company focuses on small, expert-led cultural and history tours. They have been on hold since spring, in the absence of most of the 62 million tourists who visit Italy each summer. Some 5.6 million of those are Americans–the biggest non-European market, and second overall after Germans.

“Business is quiet without Americans,” Todd says.“The historic centers of most Italian cities are empty with any “real” life happening only in outlying neighborhoods. Museums are empty and of course tourist guides are out of work.”

One of them is Brenda Lee Bohen, a dual citizen Rome guide trained in historic preservation. She works for Context “with 100% American tourists”, drawing on her expertise in the Jewish history of Rome.

“I have absolutely no more income anymore–nothing, with all tours cancelled since March. None of us licensed guides who primarily work with Americans have business due to Covid-19 and the Italy ban on non-essential travel.”

The fallout on the Europe and U.S. travel bans for the world’s fifth top tourist destination is mammoth. Of over 180 million tourist nights in Italian hotels in 2018, U.S. visitors alone soared by 15% to 14.5 million. They contribute about €2.8 billion to Italy’s €42 billion of tourism revenue says the Italian national statistics office.

Rome, Florence and Venice are the big trio of attractions.

“The stop on U.S. tourists penalizes Italy,” says Bernabò Bocca–president of the national hospitality association, Federalberghi. “We have very serious repercussions from the loss of the U.S. market, the leading one in terms of spending power,” he told La Stampa. The “Schengen rules” he said are having “devastating economic repercussions on Italian tourism.”

The fallout on tour guides has led to a wave of protests across the country.

Italian American Guides Out Of Work

There is quite a community of Italian-American guides in Italy, married to Italians.

Theresa Potenza is another. Much of her “Tour With Theresa” work in high season comes via the Centro Culturale Italiano di Buffalo, which promotes Italian culture in the Western New York area. Typically 3-4 families visit a week from there.

“My entire livelihood relies on American tourists. Personally, I’ve lost an entire year of income, considering it is almost the fall and our work is seasonal from March-October.

“In losing my business with Americans and especially Buffalo families, I have lost not only my income and passion, but also my community.”

“Guiding American families for me is also an opportunity to bridge the two cultures and form bonds, and make connections between my two nations, and family and friends.”

Ciao (As in Bye) Bella Roma

The pain is being felt on both sides of the Atlantic.

“Most of my customers have been devastated having to cancel their trips which were also momentous occasions in their lives, something they’ve saved for all their life, a dream come true,” Potenza says, “a gift to their parents or grandchildren, a celebration of a major milestone… honeymoons, graduations, anniversaries, etc.”

Many clients are hoping they will be able to postpone cancelled trips until next year.

Caring for an “energetic 3-year old at home”, with childcare options limited during the crisis and schools and daycares closed, has made it challenging Potenza says, “to focus on reinventing my brand and business, to adapt, and earn an income.”

The silver lining: “Since tourism pretty much disappeared, I have at least had the opportunity to be home to care for my daughter.”

“I am hoping my industry is just on hold and I’ll be back to work by next season.”

There are differing views on levels of government support.

For Potenza, there has been “very little”. “Especially considering tourism is such a large part of the Italian economy and that tour guiding is such a heavily government controlled profession with rigorous and competitive state licensing exams.”

Todd says another relief bill is about to be passed, providing aid to museums, following on from hospitality and seasonal tourism sectors.

“Museums have lost all of their summer revenue … Americans make up a very large portion of ticket buyers in Italy’s major cities.

“The government has rallied to support what is a critical part of the country’s GDP (about 12%), which should help tourism businesses rebound even more quickly when travelers return.”

Individual guides however have been left to carry the burden alone.

Contemplating her birthland from Rome, Potenza hopes Americans will now be willing to make similar sacrifices as Italians did, to get on top of the virus spread. With a real, rallying, we’re in this together spirit.

“This was done in my opinion by strict police enforcement during quarantine on leaving your home, neighborhood or municipality; and now with masks and temperature controls in public venues.”

Meanwhile, in a Fellini-like way, Rome as other Italian cities are living something of the past without the crowds.

“There is a beauty to the empty streets of Rome,” Potenza says, “but it is accompanied by a sense of melancholy.” 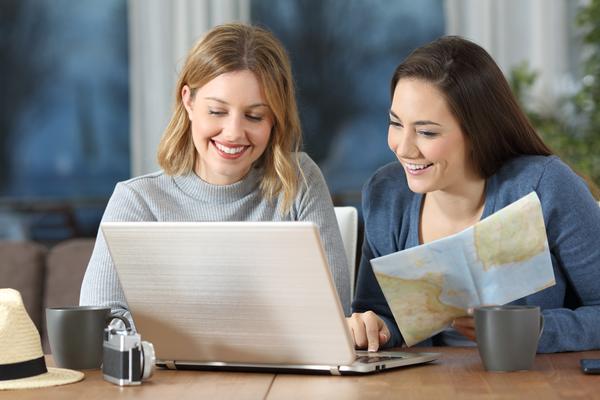