While some travel agencies have started offering short-distance tours, others said that the Central Epidemic Command Center (CECC) slightly easing restrictions would not make any difference to businesses devastated amid a nationwide level 3 COVID-19 alert.

Although the CECC extended the alert until July 26, it eased restrictions on travel agencies, allowing them from yesterday to organize tours for fewer than 10 people. 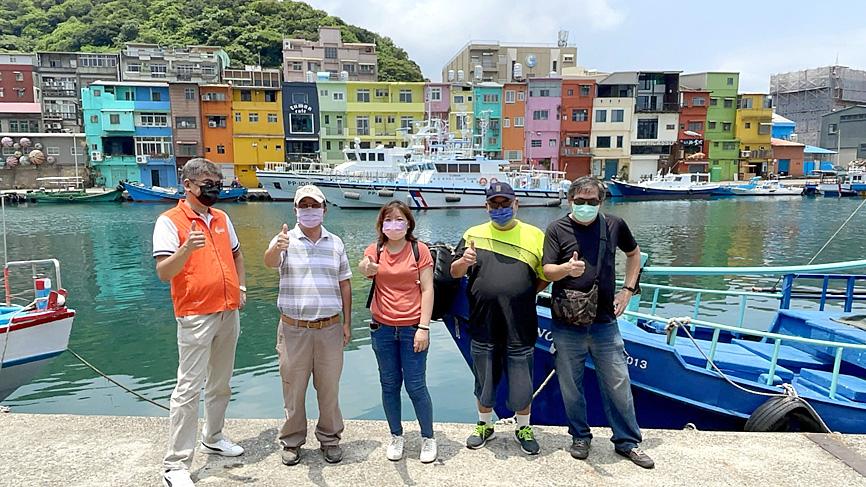 The four people on the tour departed from Taipei Railway Station and visited the island and other tourist attractions in Keelung.

As restaurants are still banned from offering dine-in service, the travel agencies booked a room at a bed-and-breakfast in Keelung and ordered lunch through room service.

Chung Hsin Travel Service chairman Ringo Lee (李奇嶽) said that the tour might be small, but it was better than nothing.

“It is impossible to reap huge profits like this, but it is still business and at least a good sign,” Lee said. “We are just focused on offering quality tours.”

However, Travel Agency Association chairman Hsiao Po-jen (蕭博仁) said that the rules are unfathomable and firms were not given enough time to organize.

“This policy is all wrong. The CECC allows nine people to sit in a van, but it allows no more than five people at indoor facilities,” Hsiao said.

“Is a van more spacious than a restaurant? It is illogical,” he said, adding that tours are meaningless if people cannot dine in restaurants.

The CECC did not communicate with travel operators — who would have proposed more reasonable alternatives — before implementing the policies, Hsiao said, adding they were not able to dispatch tours given such short notice.

Organizing small tours is neither profitable nor risk-free, he said, adding that people could arrange such tours themselves without a travel agency.

The Tourism Bureau yesterday advised that travel agencies are allowed to arrange tours of up to a few days for small groups, with limits on how far people can travel, while arranged food would be limited to takeout.

“We are still under a level 3 alert for COVID-19 and preventing the spread of the disease remains the top priority,” bureau director Chang Hsi-chung (張錫聰) said.

“We advised travel agencies to consult local health officials over guidelines for indoor dining, which varies across Taiwan,” Chang said.

Comments will be moderated. Keep comments relevant to the article. Remarks containing abusive and obscene language, personal attacks of any kind or promotion will be removed and the user banned. Final decision will be at the discretion of the Taipei Times.

Future of PMS Technology for Hotels

How to book a local flight in Nigeria Online